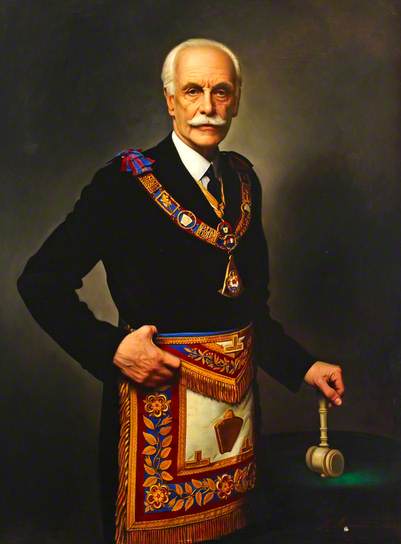 The family seat is Belmont House near Faversham in Kent.

The barony of Harris, Seringapatam, and Mysore was created in 1815 for the military commander General Sir George Harris. He gained fame as Commander-in-Chief at the siege and capture of Seringapatam and the conquest of Mysore in India in 1799. He was also injured at the Battle of Bunker Hill in the American Revolutionary War.

He was succeeded by his eldest son, the second Baron. He was a Lieutenant-General in the Army.

His son, the third Baron, served as Governor of Madras and also held minor office in the second Liberal administration of Lord Palmerston.

On the death of his grandson, the sixth Baron, in 1995, the line of the eldest son of the first Baron failed.

The late Baron was succeeded by his fourth cousin, the seventh Baron. He was the great-great-grandson of the Hon. Michael Thomas Harris, second son of the first Baron.

George was educated at Eton College, Berkshire and Christ Church, Oxford, where he obtained a Bachelor of Arts degree in 1914.

During the First World War, he served as Captain in the Royal East Kent Yeomanry and he was awarded a Military Cross.

He married Dorothy Mary, fifth daughter of the Reverend John William Crookes, on 27 July 1918 and they raised one son.

He became a Justice of the Peace for Kent in 1919.

He succeeded to his title as fifth Baron Harris of Seringapatam and Mysore and Belmont on the death of his father, the fourth Baron, in 1932.

He was an assiduous collector of clocks, with a collection of over three hundred pieces and he became Master of the Clockmakers' Company in 1960 and the first President of the Antiquarian Horological Society. Many examples of his horological collection are on display at Belmont House, Throwley, nr. Faversham, Kent.

In 1968 he was awarded a Master of Arts Degree by Christ Church College, Oxford.

He became a joining member of the following Lodges:

He was a Petitioner and Founder of the following Lodges:

Sydenham Wells Lodge, No. 5033, London which was consecrated on 5 July 1928, where he served as first Worshipful Master, resigning in 1967 when he was elected an honorary member.

He was appointed Junior Grand Warden by the United Grand Lodge of England in 1927.

In 1968 he was invested with the Order of Service to Masonry by the Pro Grand Master Lord Scarborough.

In Royal Arch he was exalted in Apollo University Chapter, No. 357, Oxford in 1912. He was appointed Grand Scribe N by the Supreme Grand Chapter of Royal Arch Masons of England in 1927.

In Knights Templar he was installed in Cœur de Lion Preceptory, No. 29, Oxford in 1912. He became a joining member of Black Prince Preceptory, No. 146, Canterbury, where he served as Eminent Preceptor and Roffa's Camp Preceptory, No. 224, Rochester, Kent. He was a Founder of Kyngstun Preceptory, No. 225, Surbiton, Surrey in 1923. He was appointed First Great Constable of The Great Priory of the United Religious, Military and Masonic Orders of the Temple and of St. John of Jerusalem, Palestine, Rhodes and Malta of England and Wales and its Provinces Overseas in 1919 and he was promoted to Great Seneschal in 1932, serving until 1947 when he was installed as Grand Master, resigning in 1973.

In Ancient and Accepted Rite he was perfected in Oxford University Chapter, No. 40, Oxford. He was awarded 33º in 1949. He was a Past Inspector General of Kent and he was appointed a Sovereign Grand Inspector in 1956.

Lord Harris was advanced in the University Lodge of Mark Master Masons' No. 55 in Oxford, and was their Senior Warden in 1916. Because of the 1914-18 war he never went in to the chair.

Having become a joining member, he was Installed as Worshipful Master of St Martins Lodge of Mark Master Masons' No. 262 at Canterbury on 28th January 1921.

The Installation as Provincial Grand Master was at Canterbury on 6th November 1936. (RW. Bro. Roland Wade gives an excellent description of the event in his first book)

Also in 1944 he presided over the Mark Benevolent Fund Festival, which raised £27,285, of which Kent raised £13,084, breaking all previous records, although this record was broken twelve months later. It is believed that Lodge 999 was formed through the enthusiasm generated by the success of the Festival, even though in the height of the 1939-45 war.

He was appointed Deputy Grand Master of the Grand Lodge of Mark Master Masons of England and Wales and its Districts and Lodges Overseas in 1952 and Grand Master in 1954, serving until 1973. He was the second Kent Mark Master Mason to hold this most senior office, following Lord Amherst ninety-one years earlier (1863).

The above picture is reproduced by kind permission of the trustees of the Harris (Belmont) Charity. Belmont House is open to the public. For visiting arrangements please visit the Belmont House website here.

The inscription on the above clock reads:

MARK MASTER MASONS OF THE PROVINCE OF KENT

The bi-metal clock was presented to Lord Harris at the 77th Annual Provincial Mark Meeting on Saturday 17th September 1949. The presentation, by the Deputy Provincial Grand Master, RW. Bro. F. W. F. Arnaud, Past Grand Warden, was to commemorate the Provincial Grand Masters' 60th Birthday. The meeting, held at The Winter Garden, Cliftonville, Margate, was under the Banner of the Margate Lodge No. 1073.

The clock, one of 340, can be seen at Belmont House, Faversham, Kent, and is well worth a visit.

In 1935 the St Vincent Lodge of Royal Ark Mariners No. 262, was founded, with Lord Harris as the first Commander. Although not credited at the time, later research shows that the Lodge was named after George St Vincent. Lord Harris inherited the name St Vincent through his mother's lineage.

During 1936 and 1956, whilst Lord Harris was Provincial Grand Master, ten Mark Master Mason and eight Royal Ark Mariner Lodges were founded and consecrated. (Details of each Lodge, and the circumstances surrounding their foundation, can be found in RW. Bro. Roland's books, and makes for excellent reading)

He supported the Masonic Charities and served for thirty-eight years on the House Committee and General Committee of the Royal Masonic Institution for Girls from 1932, and acted as Chairman from 1954, resigning in 1970.

During his term of office he escorted five Royal visitors to the school. He became a Life Governor of all three Masonic Institutions and of the Mark Benevolent Fund.

In 1973 Lord Harris gave up all his active offices.

The Lord Harris Lodge of Mark Master Masons' No. 1494, having received permission from the Harris family to use the name, was consecrated on 21st January 1978.

The above article was submitted by W.Bro. Steve Dunsdon, PAGSwdB, PPrGMO, who makes the following observations:

Having made enquiries it was apparent that the clock had disappeared from Masonic memory.

My research made me realise that, although George St Vincent, the Lord Harris, 5th Baron, was well documented, his Masonic bibliography was fragmented.

I felt that to explain the clock, I had to build up a picture of the Mason first.

The Library and Museum of Freemasonry (Great Queen Street)

The Trustees of the Harris (Belmont) Charity

'A Brief History of the Mark Province of Kent'

The Masonic Library and Museum (Canterbury)