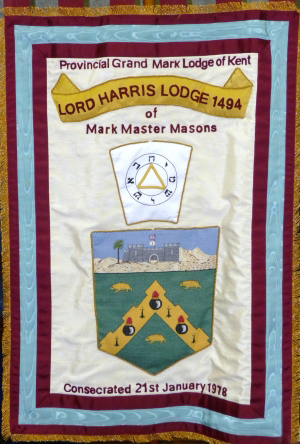 The Lodge banner is shown above. It bears the arms of the Harris family. The arms are described in Cracroft's Peerage as follows:

"Vert on a Chevron embattled Erminois between three Hedgehogs Or as many Bombs Sable fired proper on a Chief of Augmentation a Representation of the gates and fortress of Seringapatam the drawbridge let down and the Union Flag of Great Britain hoisted above the standard of Tippoo Sahib all proper."

The Banner Procession formed and the Banner was carried into the Lodge by W.Bro. Paul Lincoln, escorted by the Worshipful Master, W.Bro. Joe Oremi Cole. The Brethren sang the hymn "O God Our Help in Ages Past". The banner was then presented to the Provincial Grand Master, who unveiled it and called upon the Provincial Grand Chaplain, W.Bro. John Sylvester, for the benefit of prayer. W.Bro. John also delivered a captivating oration.

The Lord Harris Lodge was consecrated on 21 January 1978 but had never commissioned the making of a Lodge Banner. Some two years ago, the idea of commissioning the creation of a Banner was raised by W.Bro. Archie Torrance. A round of activity, driven and coordinated by the Secretary, W.Bro. Derrick Lincoln, followed.

The Banner Committee worked on designing the banner and agreeing the proposed final outcome with the Lodge.Once this had been completed, attention focused on the practicalities of obtaining (and financing) a banner. Anyone, who has researched the matter, will be aware of the cost of a Banner. The Lodge was, however, fortunate that it has connections with W.Bro. David Stiff, ProvDepGSwdB and subsequently appointed to the active rank of Assistant Grand Director of Ceremonies. W.Bro. David's wife, Mrs Janet Stiff, was approached and she agreed to make a Banner for the Lodge. The Banner was completely hand made by Janet. As can be seen, it is striking in its beauty. It was impossible to watch the Banner being paraded around the Lodge without feeling the emotion brought about by the culmination of two years' intensive planning and work.

Two striking features of the coat of arms on the Banner are a castle, representing achievements from the military career of the first Lord Harris and three hedgehogs. The French word for hedgehog is "hérisson", hence the connection with "Harris".

During the meeting, the Lodge presented the Provincial Grand Master with a cheque for £250 for the Kent Mark Benevolent Fund. At the festive board, where 73 sat down to dinner, the Charity Steward, W.Bro. Ian Gallehawk, presented W.Bro. David Stiff with a cheque for £150 in favour of the Orchid Trust, a charity devoted to fighting male cancer. This was Janet Stiff's chosen charity, Janet having declined any personal reward from the Lodge!

To round the evening off, the WM, W.Bro. Joe Oremi Cole, gave the Lodge a brief history lesson. W.Bro. Joe is a native of The Gambia. On 18 February 1965, The Gambia gained independence from Great Britain. Exactly 46 years later, a son of The Gambia was able to stand proudly as the ruling Master of a Mark Lodge in England as its Banner was dedicated. A copy of the summons and order of ceremony can be seen by clicking on the image to the right.

A gallery of pictures from the evening can be viewed through the links to the left or by clicking here.