Tuesday 12 December 2017 saw a very busy day for the Mark Lodge. The first part of the business of the Lodge was to Advance Brothers John Lloyd and Alan Larbey. Bro. Alan (second from right) came to the Mark Degree through the system of ambassadors and representation at centre open days, making his advancement the first in Lord Harris as a result of the renewed Provincial emphasis upon recruitment. Both Brothers are most welcome and took the time after the meeting to pose for a photograph as shown below from left to right, W.Bro. Robert Stevens (proposer for Bro. John), Bro. John Lloyd, RW. Bro. Archie Torrance (proposer for Bro. Alan), Bro. Alan Larbey and W.Bro. Trevor Jones (seconder for Bro. Alan).

Having recovered from the rigours of a Double Advancement, the Lodge Secretary, W.Bro. Steve Dunsdon (below centre) presented Brothers Reg Graham (below left) and Tony Kilkenny (below right) with their Grand Lodge Certificates in a pleasing manner enjoyed by all.

With two new brothers and two receiving their Grand Lodge Certificates and preparing to further their journey in the Mark Degree, the future for the Lodge looks secure for some time to come. The day was rounded off with the traditional carols at the Festive Board, enjoyed by all as the evening became loud and enjoyable for all. 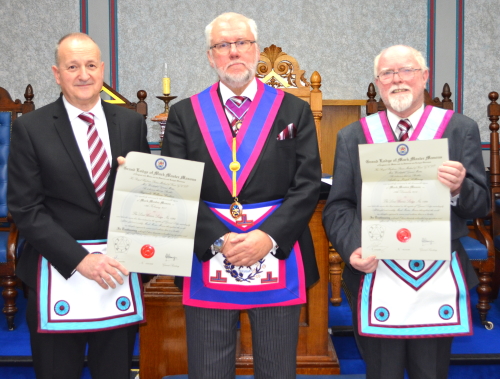